While your event is happening, all the analytics you need will be updated in real time! Learn how to access them with this article.

Written by Chloe Tykal
Updated over a week ago

We start off with the Dashboard:

Here you'll be able to see some general analytics for your virtual event. The first one will be Total Registrations — this displays how many people have registered for your event:

Under that you'll have an Event Ticketing section:

In this section you'll be able to see five different types of data:

Let's move on to Analytics, here you'll be able to see analytics for the following:

When you access Analytics, you'll first be in the Registration tab. It'll show the same information that's displayed on your Dashboard — the Event Ticketing section. If you scroll down, you'll see a table for Recent Orders: 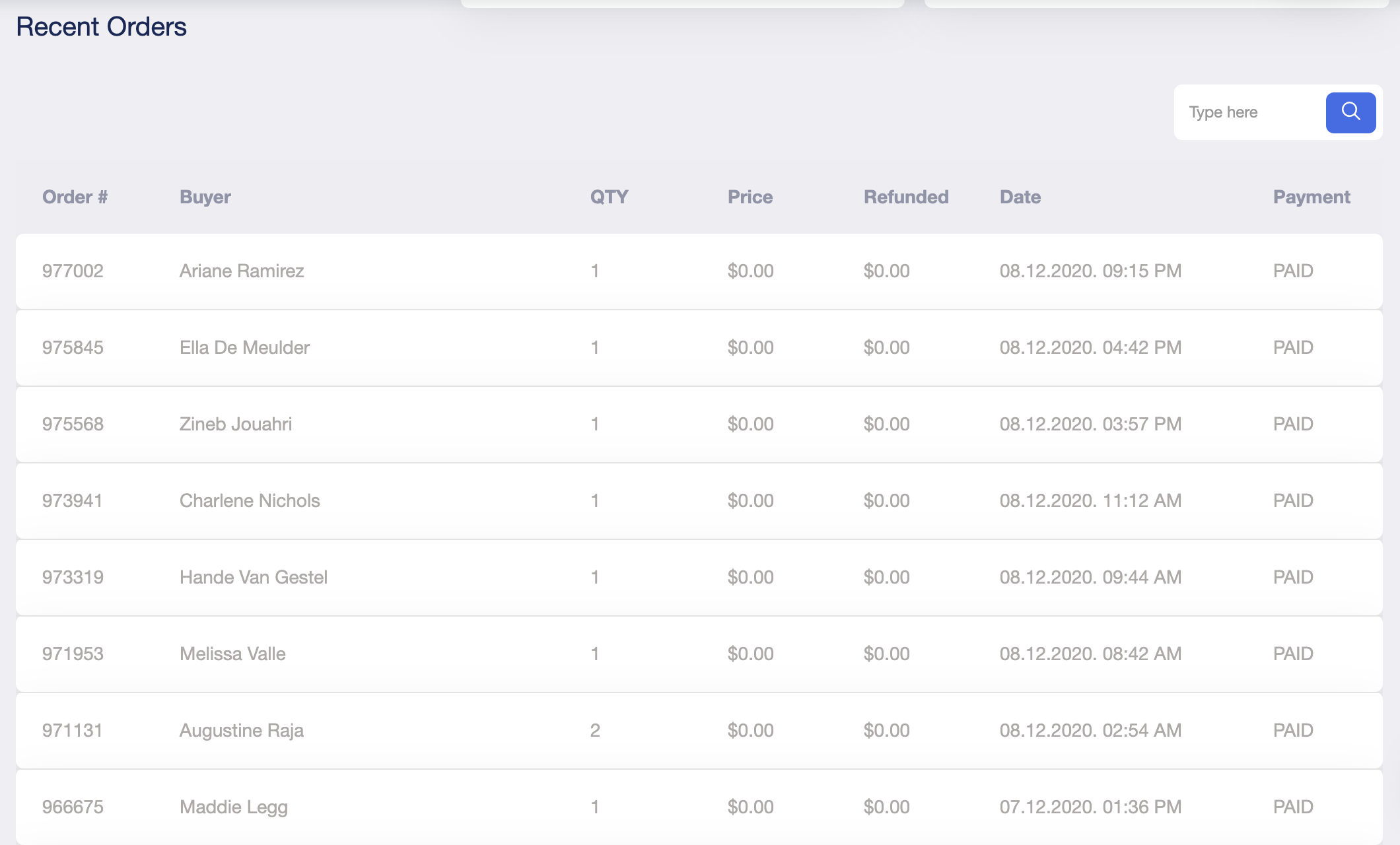 On top of that, there's also a search function that you can use to search for Order # or Buyer names.

You can also Download your Ticket Buyer, Ticket Holder, Registration, Add-on purchases, Cart Abandoned Registrants, Polls Data information on this tab, as well as data for your Q&A:

These are CSV files that will display the information available on your Recent Orders tab, as well as the fields that were filled by attendees upon registration.

Next, we have the Sponsors tab — we're currently updating this feature. As of now, it only displays the number of sponsors that are present in your event, but in the future, you'll also have access to the total amount of clicks on a sponsor, the number of unique clicks, and also the average amount of clicks per sponsor. Click here to learn more about sponsor analytics.

On the Exhibitors tab, the general analytics for the booths within an event are presented on the top. It showcases the following: 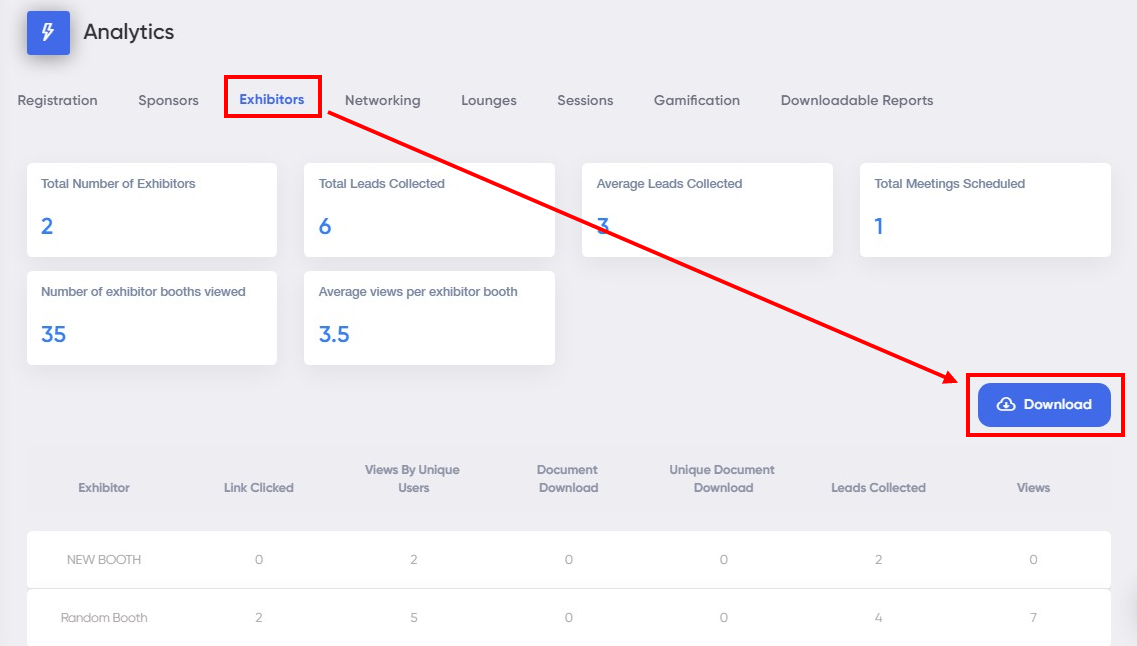 There's a Download button under these numbers — that button downloads a CSV file containing the lead information collected from each booth.

Under it, you can find the analytics for individual booths:

This table contains the following parameters:

If you click on a specific booth, it'll display specific analytics for that particular booth: 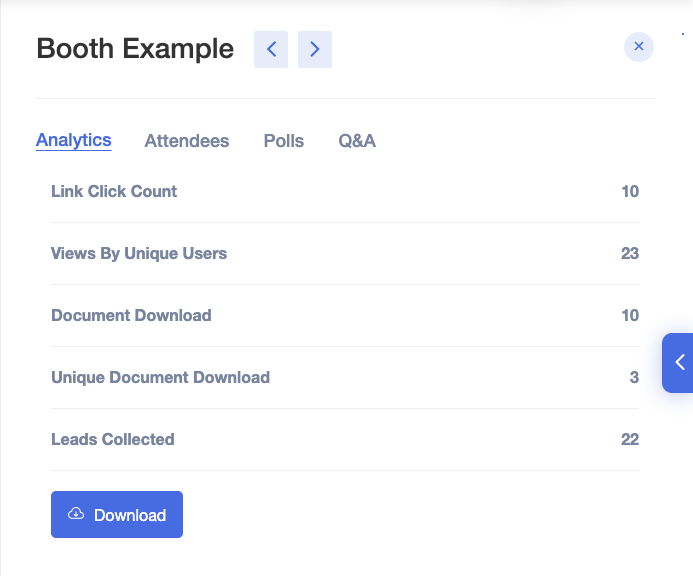 The first tab is Analytics. This displays the same information that's presented on the table. However, there's a Download button that downloads the Exhibitor CSV for that particular booth. This is a CSV that contains information about the interactions that each user had with the booth.

IMPORTANT NOTE: currently, this CSV's last three columns, namely Total Time in Booth, Video Played, and Chat, are only displayed if the event has Gamification or Enhanced Gamification turned on.

On the Attendees tab, we have two other tabs — Visitor and Document Downloaded:

The Visitor tab displays the visits that the booth had during the event. The Document Downloaded tab displays which users downloaded documents in the booth. Both tabs also detail the times when those interactions took place.

Tabs for Polls and Q&A are also available, but these features haven't been released yet, so a 'Coming Soon' message is displayed as a placeholder.

Next, we have the Networking tab — at first glance, you'll be able to see the number of total connections made, average connections per attendee, total meetings, and total matches. A feature is not released yet and displays a 'Coming Soon' message — Total Messages Sent.

There are two tabs inside Networking analytics: Networking Sessions and Connections. 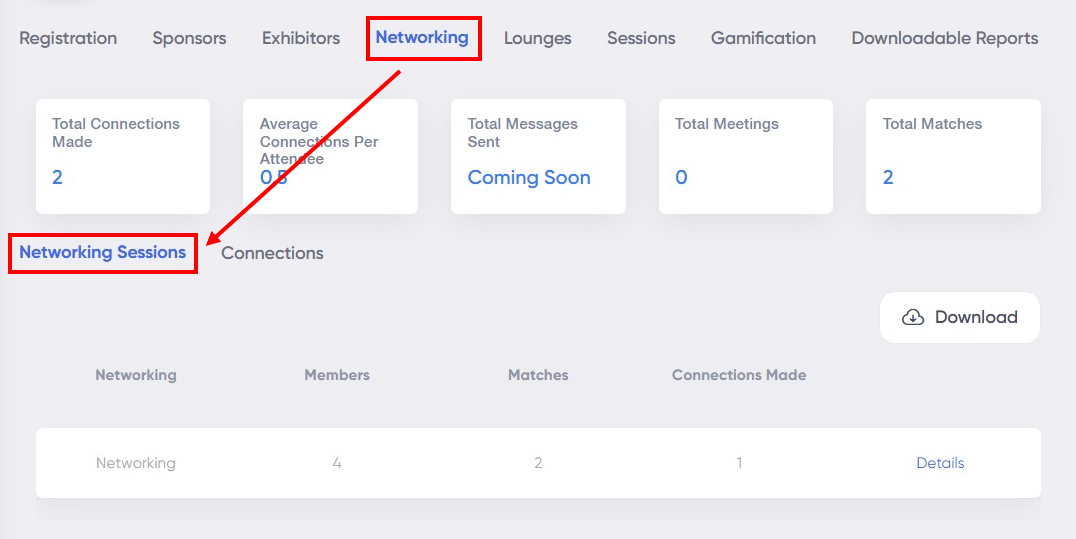 On the Networking Sessions tab, you'll find a table containing this information: 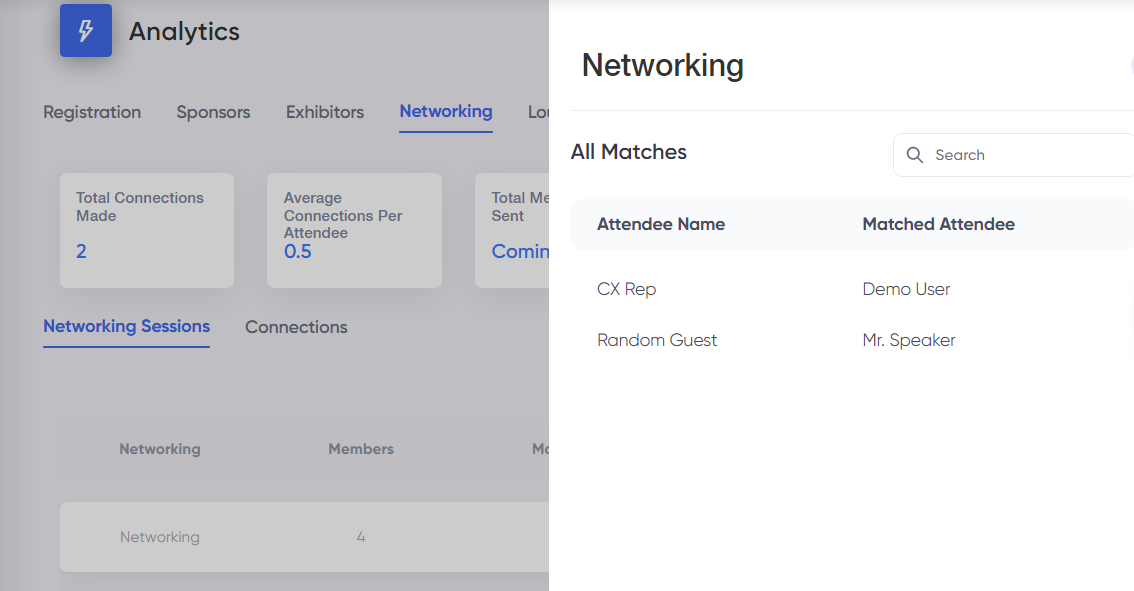 There is a Details button that you can click on and a new tab will collapse on the right side of your admin console showing All Matches with a list of attendees and the attendees that they've matched with.

There's also a Download button — the CSV obtained through this button displays information on the matches that were made on the event's networking sessions.

The Connections tab is not finished yet, so it displays a 'Coming Soon' message.

On the Lounges Analytics, you will find the following information: 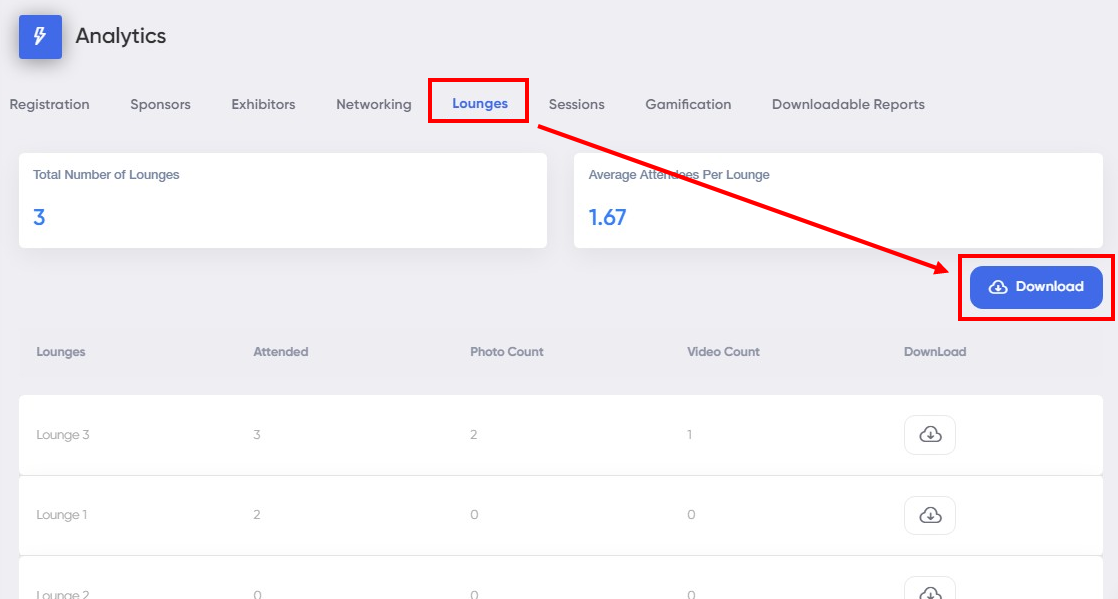 Clicking on a lounge will give you more information such as who joined in as well as their actions such as posting images or videos, duration inside the lounge and how many times they visited the lounge. The Lounge Chat and the Discussion History can be downloaded as well.

On the Sessions analytics menu, you'll find this information on top:

The Download button under these numbers allows you to access two CSV files: Session Overview, containing details about the sessions, and Session + Attendee Comparison, displaying which sessions each attendee has attended.

Under the download button, a table containing the event's sessions can be found:

This displays six analytics regarding sessions:

There's also a Download button on each tab that can be clicked in order to get a CSV file that contains information about each viewer's attendance.

The Gamification tab is also under development, so no information is displayed, but there's a Download Gamification Data button that transfers a CSV file containing information on each attendee's Gamification interactions, breaking down their total points into different categories. 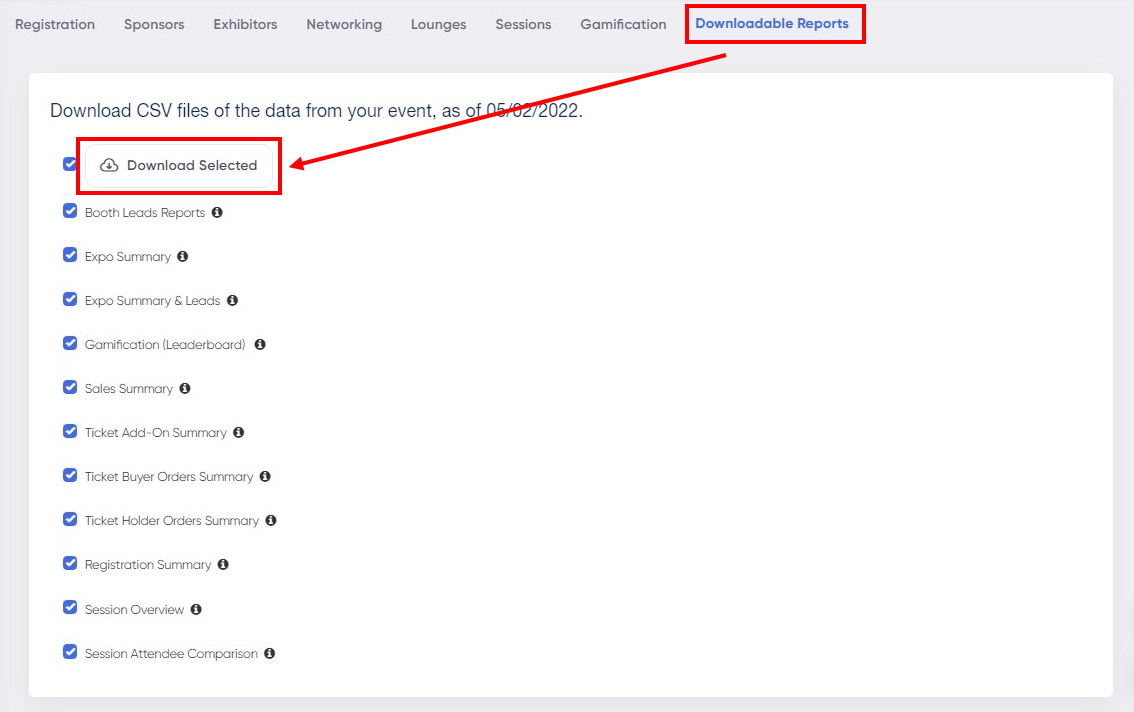 If you're under a Scale Plan or higher, you should have access to additional analytics such as attendee analytics and session analytics line graph.

The attendee analytics will give you an overview of who your attendees are. It will show you their profile, ticket information, and which sessions they joined.

The session analytics line graph will indicate which parts of the session had the most attendees both for the live session and when they view the recording.

Will the data be captured if attendees view the recording after the event?